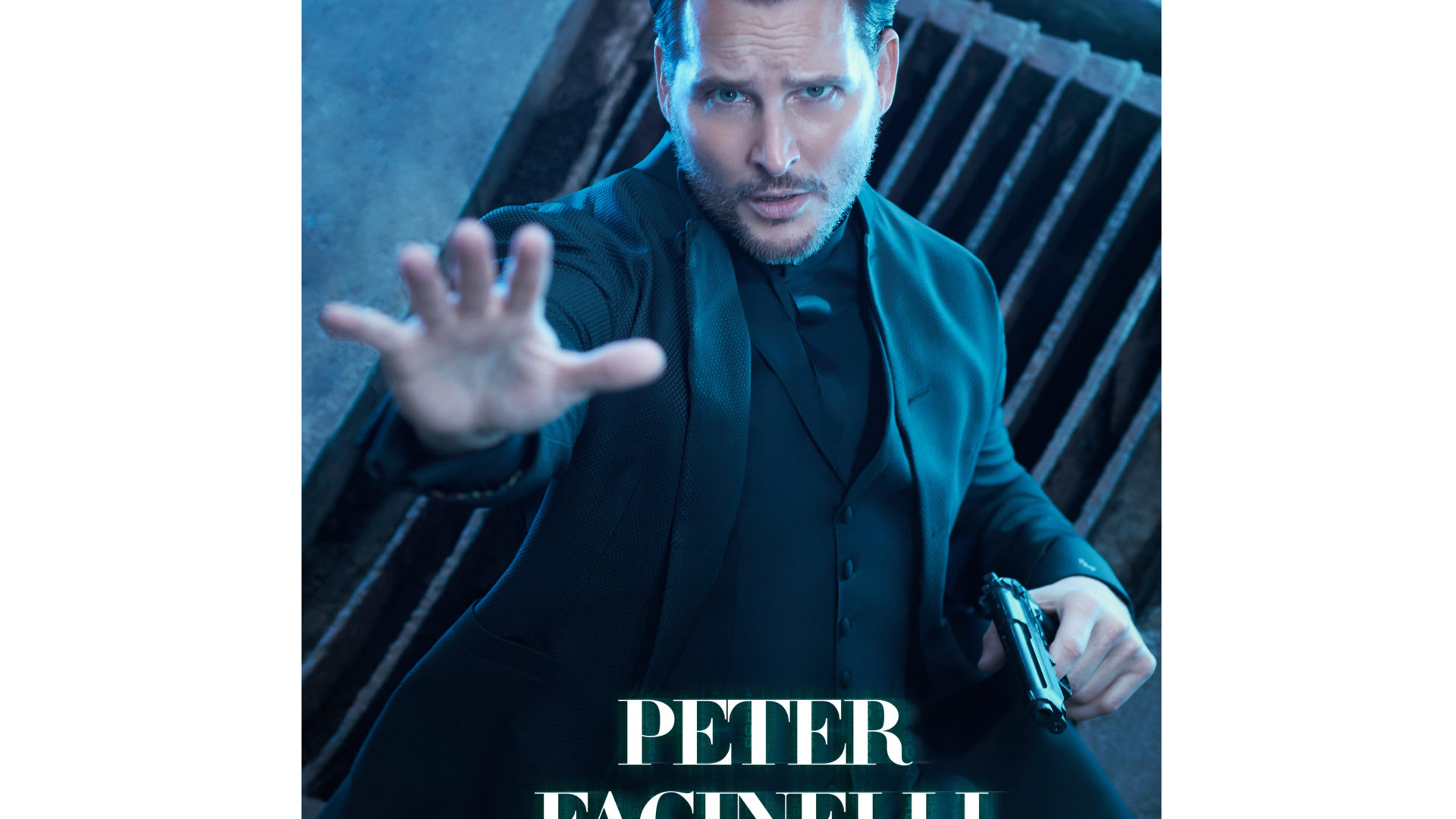 Is the MATRIX. Story by Derek Warburton.

Peter Facinelli knows no bounds. From his star making role in the “Twilight” series to his new career as a writer and director, Facinelli is in an inspired place. Mr. Warburton sat down with the Hollywood leading man to discuss finding his power through letting his creativity take charge.

Facinelli, born in Queens New York has been an actor as long as he can remember. With a flourishing career as a fashion model, at one point Peter even used a different name. “It was a great way to make money to help me pay for NYU, where I studied acting, and I really loved traveling and working in different places”. That was the start of his rise to fame. In 1995 he got his first film role, and everything took off from there.

I feel very fortunate to have been able to make a living over the last twenty five years doing what I am most passionate about… telling stories… As an actor I tell a story using my voice and body -through a character. As a writer, I can create the story, and as a director, with the collaboration of many, I can bring that story life.

Many may know him as Carlisle Cullen in the film adaptation of “Twilight”, a book by Stephenie Meyer, but Peter had been an established actor for nearly fifteen years, long before Twilight came along. “The International success of that film opened up a bigger worldwide fanbase for me, which I am very appreciative of. Every actor hopes that they are part of a film that has a worldwide appeal.” He does admit it’s never easy to know what makes a film such a box office success. At first he didn’t want to do the movie, “When my agents first approached me, they asked me if I wanted to do a vampire film. I said, no.” He laughs. “The way they pitched it– it sounded like a bad horror film, but after I read the book, I was desperate to be a part of it. I thought it was so well done. It was this beautiful love story with the vampire world as a mystical backdrop.” Accepting the role turned out to be a good idea as the film turned Peter Facinelli into a household name.

While he was in the midst of completing four sequels to the first “Twilight” film, he says he felt very fortunate to be cast in the role of Dr. Cooper on the award-winning Showtime series Nurse Jackie. “It was wonderful to be a part of something that had such great commercial success like Twilight, but I really felt fortunate to be on a TV series that had critical acclaim as well. To have a TV series where I was working with incredible actors, like Edie Falco, was so incredible for me at that time. I was literally filming both at once. I would fly to Vancouver and shoot the sequels, then fly to NY to play Dr Cooper. Both roles were so different, and I loved having two jobs at a time.”

After working consistently for several years, Facinelli felt it was time to slow down a bit. “Twilight and Nurse Jackie came to an end, then I booked the lead in a TV series called “American Odyssey,” for NBC. That show lasted one season, but it filmed in New York. When it didn’t get picked up for a second season there was a part of me that was happy, because I was tired. I wanted to spend more time with my family.” At that point in his career he had been working two jobs simultaneously for almost ten years straight, had done some movies in between as well, and went straight into doing the leading role of another TV series. “My kids were growing up right before me, and I thought to myself, who am I doing all this for? My kids will be grown up one day, and I’ll have missed their childhood.” That was all it took, and in that stage of his life he opted for opportunities that kept him close to home.

For a few years he was content, doing arcs on TV shows that filmed in Los Angeles, and had fun portraying villain Maxwell Lord on the first season of “Supergirl,” and also had a recurring role as civilian Police Commissioner Michael Plank, on CBS’s S.W.A.T. With his kids now older (13, 17, and 22) Facinelli says he’s ready for the next chapter of his career. So what does that look like?

I’m open. I feel like I have just scratched the surface on what I want to achieve in my work and I’m open and excited for what’s next.

Open for anything? We asked if he would be open to playing a transgendered character. Facinelli says, “I would never base taking on a role, or not taking on a role based on someone’s sexual preference, or based on the sexuality they identify with. I don’t believe those things define who a person is. So, I would be open, because I would not, not be open, based on that.. I like playing characters that are different than who I am. I’m always trying to find other parts of myself through characters. It’s a real magic trick to be able to disappear and become someone else. I love that magic. Cary Grant once famously said, “Everyone wants to be a Cary Grant, I want to be Cary Grant.”

While discussing the next stage of his life Facinelli gets frank. “I don’t have 5, 10, or 20 year goals. I try to live in the moment. And that moment takes me to the next.” When asked if any of those moments included focusing more on writing and directing, he says they definitely do.

Facinelli has been writing for years with his first film “Loosies”, (2011) which he wrote and starred in, and next came his directorial debut with “Breaking & Exiting.” “I’m really proud of that film,” Facinelli says. “The director they had for the film fell off, and when I signed on I had less than a week of prep. We shot it in 12 days, and I didn’t go over budget or into overtime once. The whole ride was like an adrenaline shot, and I was really happy with how it came out.” I personally had the pleasure of going to the first screening of the film which starred Jordan Hinson, Milo Gibson and his new fiancé Lily Anne Harrison and was impressed. I asked Peter if being an actor made directing actors easier.
“I think so. I know how vulnerable it is to be in front of a crew baring your soul. I feel like actors trust me because of that, and I know how to speak to actors in a language they understand. As I watch them on the monitor, I notice everything they are doing. I feel like I’m in the scene with them. I’m right there in the trenches with them, so I know how to guide them, and how to help shape their performance.”

So does the next chapter look a little different for Peter Facinelli?
Peter: “I’m not sure. Sometimes I feel like I hide myself in my roles. The hardest role to play is yourself. Maybe I need to spend more time exploring the parts of me that exist instead of exploring parts of me that I’m trying to find. Allowing more of me to be seen…maybe.” Well, maybe we will find out. In 2020 Facinelli shows a lot more of himself. He has written and directed “Hour of Lead,” starring Thomas Jane, Anne Heche & Jason Patric.
Along with that, he is starring in “The Ravine,” a new independent film by Writer and Director Keoni Waxman, and will also star in the film “13 Minutes” to be released this year. One of the biggest roles he is throwing himself into in 2020 is that of husband. “She said yes!” Facinelli was engaged over the holidays to actress Lily Anne Harrison. “She is the definition of love”, says Facinelli about his bride to be. Peter proposed to Lily Anne in Mazatlan, Mexico over the Holidays while vacationing at the Estrella Del Mar Beach and Golf Resort.
When asked whether he has plans to grow his family, Facinelli replied, “Looking forward to getting married first, but like the next chapter of my career… I’m open. I feel blessed all around, and I’m excited for what the new decade brings. Just gonna take things moment by moment”.

MR WARBURTON MAGAZINE likes to play a lil game of word association with our cover stars. Facinelli has has worked with some incredible talent and here’s what he had to say about them, some are unexpected: