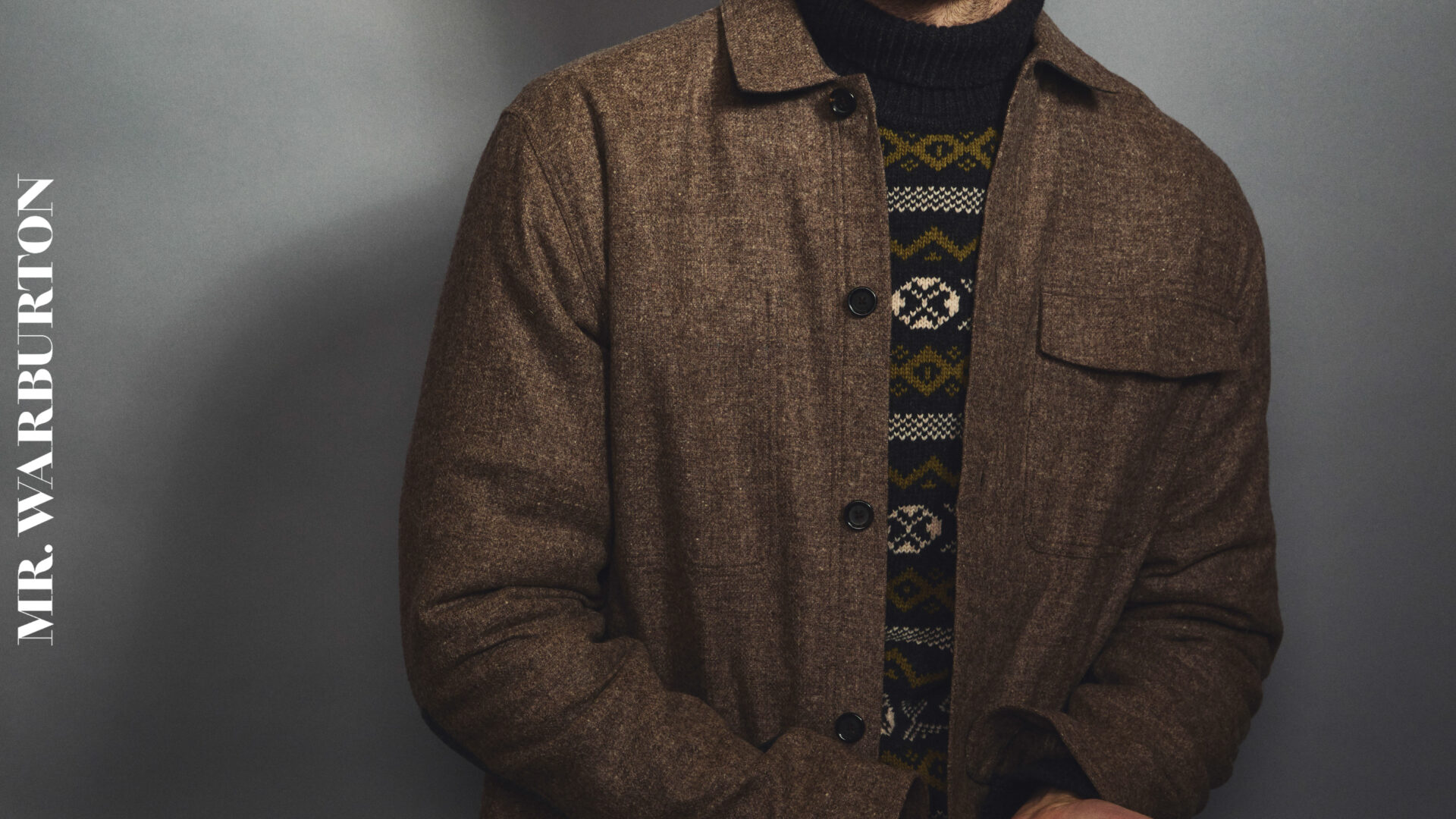 British Actor Rupert Young joined the star-studded cast of Netflix’s Bridgerton as its latest addition–  Jack  Featherington,  a new mysterious and enigmatic figure in the lives of London’s finest elite.

Rupert’s previous roles include Sir Leon in Merlin while also snagging roles in British favourites such as  Doc Martin, Foyle’s War,  Hotel Babylon, The White Queen and Doctor Who. His most famous role as of late, other than snagging the prestigious role of Jack Featherington is Larry Murphy in West End’s Dear Evan Hansen, where he was nominated for The Laurence Olivier Award For Best Actor In A Supporting Role In A Musical.

In season 2, the ton’s most eclectic and notorious family finds themselves in a rut as the previous Lord Featherington met his untimely end. Paired up with the ambitious Portia Featherington played by Polly Walker, Regency London’s most ambitious mamma, Jack and the brazen family brood are ready to shake and rock the season’s illustrious elite.

Congratulations on your role as Lord Featherington! Could you describe to us what was it like when you found out that you would be playing a pivotal role in the series?

It took me a while to get my head around and it was nice because I taped an audition before the first season came out and then four months later,  I got a call saying, “Hey you’re shortlisted for this role.

When I first auditioned the previous Lord Featherington was killed off and I had no idea that the new role was for Jack. They gave a different name and wouldn’t obviously tell you for which role it was related. I went to do a chemistry read and in my head, I worked it out –I was like, is this the Featheringtons? Then when I got the role

And then a week later I was on set and with the cast. I was part of this family now that everyone around the world knows about and to be part of the family dynamic within the Featheringtons is an incredible feeling.

Could you walk me through this, when it came to playing Jack, what was the process like getting into his role? was there any specific type of mannerisms that you had to do or that you had difficulty with?

I remember when I started to read the role I really connected to his character, I knew that there were certain things that I could bring into him. Since I didn’t get into the specifics of where he was going. As you can see he is charming, perfect kind of saviour of the family in a way. But I wanted to play off that nothing at all was what it seemed.

I spoke to Chris and I didn’t want to know where the character was going to go, ultimately, because it was nice too, not giving anything away yet to the audience. Otherwise it would have been too brief on him and the role he plays within the family. When you realize he is dodgy, it makes for an incredibly twist.

With the costumes, hair, and make-up, it was one of those things that made you act and stand in a certain way, you feel right for the period and it really did a lot of the work whilst also trying to feel relaxed, while also being a bit of a fish out of the water. Where Jack just comes in and has to adapt to this new society while also playing the head of the household It felt quite natural. We had a team of people around us making sure that we didn’t say things in the wrong way or sit in the wrong way.

So you had to do all those etiquette classes as well? Just to get these mannerisms correct?

A lot of it came naturally, so there weren’t too many things and  I think the girls had a harder time to work on it with all the fan work, corsets and the other stuff. It’s amazing how it does make you get into that.  Being on that set and in character made you act in a certain way. For me it came naturally – I guess it was my inbuilt breeding? I don’t know.

My next question to you is like, did you read the books prior to actually doing your own research about  the period and character?

I didn’t, because of  two things, one I wasn’t in the book and two I was cast and on set a week later. I had to read the scripts and learn the lines.  I thought that it was quite nice not to know as well, it was all about learning things in a new way, not knowing what was going to happen and seeing things from fresh eyes.  I still don’t know if I will  just keep watching and finding out through the story since it must be interesting for people who have loved the books.

What did it feel to be like on the Shondaland set? Because Shonda Rhimes is known for a very intricate production setting. So how did that go for you?

Uh, wow. It was amazing. I would say it was relaxed, at least that’s how it felt for me. It was staggering because it was almost surreal to be back on a set after lockdown.  I am staggered with the idea of being on a set. And especially after lockdown, working with these directors who created some of the most incredible television shows produced. Then you see everyone is so nice and good at their job. There is a freedom that I haven’t experienced before, especially with bringing the character to life — you are given so much trust with your role and guidance from the directors.

By getting stuff out of you, while still having fun, and keeping things flowing within the show’s dynamic. Especially with scenes that I have with polly. I was never terrified about saying a line in the wrong way or get whipped until I’m thrown out of the set.  The atmosphere we had was wonderful because everyone was being hugely respectful and everyone was about to do their job to the best of their ability without being micromanaged and you just feel like being part of a team.

What was it like fitting into your costumes? Because whenever they create a character, as seen with the previous season with Rege and Phoebe  they had their own particular colour, palettes, and style. So how did the colours reflected Jack’s character through his clothing?

That’s a good question. Uh, I think going back to my first big scene, the one shot at The Ascot They were initially they were trying to show the Featherington colors a little bit.

So being a little bold ro say with the purple jackets but making it less bright compared to the rest by not being so into it with the Featheringtons who wore bright and garish colourful outfits compared to what the women wore.

It was quite nice to tone him down. Well, this guy is actually someone who will make other families want to know The Featheringtons again? By being the perfect guy that allegedly has money and dresses well to fit into society. It felt like he needed to look like he fitted in, There’s also something nice about him because when we learn that he doesn’t have money, but he also eases himself in while also trying to fit. We see that when they went away to the country with The Bridgertons.

Chemistry-wise, so this is actually something that I really wanted to ask since I initially thought something was going tohappen between Nicola Coughlan’s Penelope and cousin Jack, rather than with Portia. But chemistry wise, how did it feel to work with Polly Walker and?

Nicola was one of the first people I’ve met actually she was so welcoming and excited to welcome new people.

It was an amazing scenario when all of us came together, The Featheringtons. It felt that I just stepped in but I was there, since we had a lovely dynamic offscreen. It really made me feel great. But  finding that chemistry, especially with Polly who is a Joy to work with was incredibly insightful.

Although at first, I was slightly terrified and she was very quick to make me feel comfortable and we got to develop that relationship you see on screen.  We didn’t know it at the beginning but obviously I was slightly mean and teasing her fairly enough.

Because the whole of season two was just such a slow burn. As a newcomer, did they have any tips for you? Especially from the boys? Like Jonathan Bailey?

Yeah, Jonathan was one of the first people I saw,  we’ve worked together ages ago. He was very quick to say, “ you are going to be looked after here, no need to be nervous.” It’s a lovely sensitive cast that cares about everyone.  Just don’t  worry, and have fun and know that everyone else has got that fear even though they have all been in the show. So it’s up to you, how hard you work and just enjoy it. He led the company so well, being brilliant as he is.

At every job, you want to watch people doing things and learn . There was that lovely sense where everyone is keen to see and help you out.

What was your favorite scene to film and what was the most difficult?

My favorite scene I would say was the ball scenes when you have everyone there, in terms of having fun it was brilliant, funny, and having a great time. This is from a personal point of view not the artistic side of me talking.  The most difficult would be was the shift that happened in my relationship with Portia/Polly changed and went into a  new territory. it was quite hard to navigate how that switch happened to make it real and organic. It was one of the most difficult and fulfilling scenes to film especially with Polly. Since we were throwing ideas around  on how to make it work.

The other one, was horse back riding, you still get the jolts about it.

Are we going to see more of Lord Featherington in the future? Are you allowed to give anything away?

Generally I don’t know yet. think it’s being pushed back a bit because of the new Queen Charlotte Spin-off. But we’ll see what happens. I’m still alive and I just got shipped off to a different continent by Portia.

So lastly, are there any upcoming projects that you want anyone to know about that you’re up to?

I’m  onstage at the moment in West End for Dear Evan Hansen, this brilliant musical that I’m going to be on for 2 months. Pre-pandemic, I was on it a lot and then I’m going to have a little break.